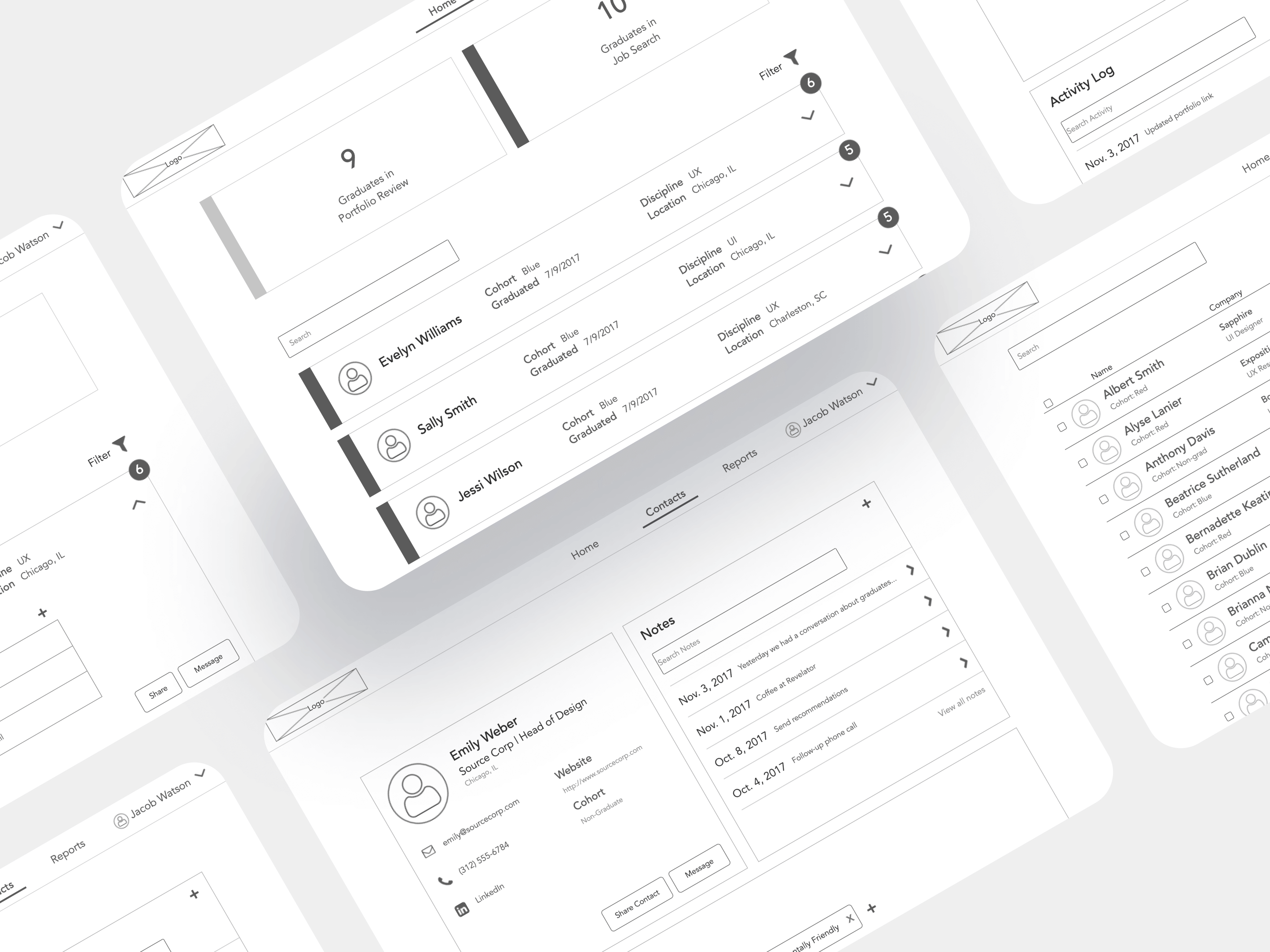 Designation tasked my team with a mock project to develop a web application to help bootcamp career advisors assist graduates in their job search. Unlike other mock projects, our project actually began with the previous cohort as they built out the graduates’ side of the platform.

I empathized too well with the graduates and their job quest, but I had no grid for the career advisors’ side. Since my team had no experience with a recruiter or a career advisor, I began by researching what the hiring process looked like to see where they fit in the process.

I found referrals played a huge role in a candidate landing a job. For example, referral candidates were 3-4 times more likely to be hired than non-referral candidates. I also found 41% of referral hires came from external networks in 2013, and referrals and recruiter-sourced hires make up most of internal sources of hire for companies. It was clear how our users could serve as referrals for candidates.

We then looked at competitors to identify gaps and opportunities in the market. We looked at organizational tools (Google Sheets and Trello), job tracking tools (Huntr and Jobtrack), and CRM systems (Salesforce and Hubspot).

Google Sheets and Trello stored a lot of data in various forms, customizable by the user, but data visibility was poor as content grew. While actually using them was easy and intuitive, initially setting up the forms was also difficult. 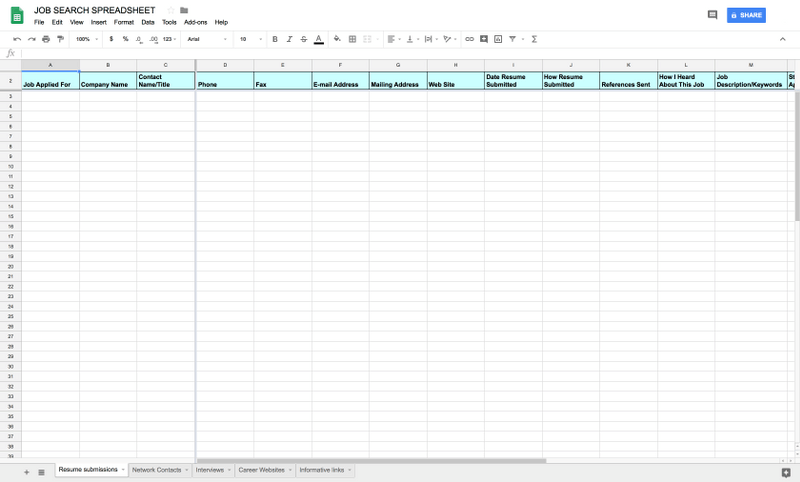 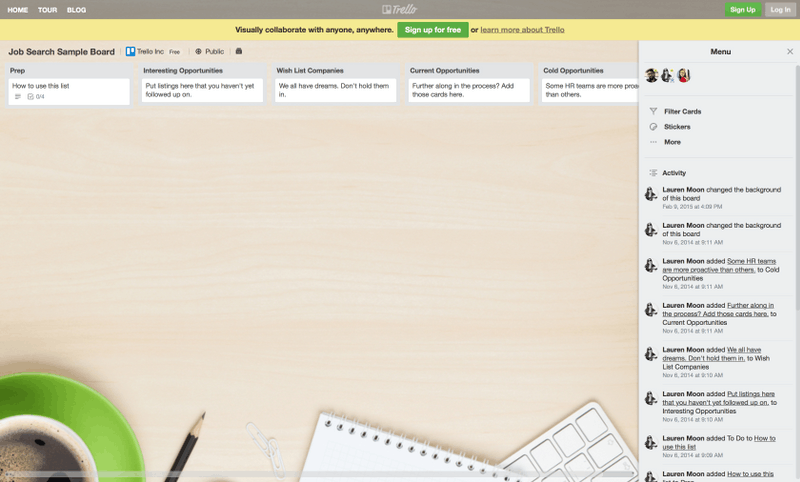 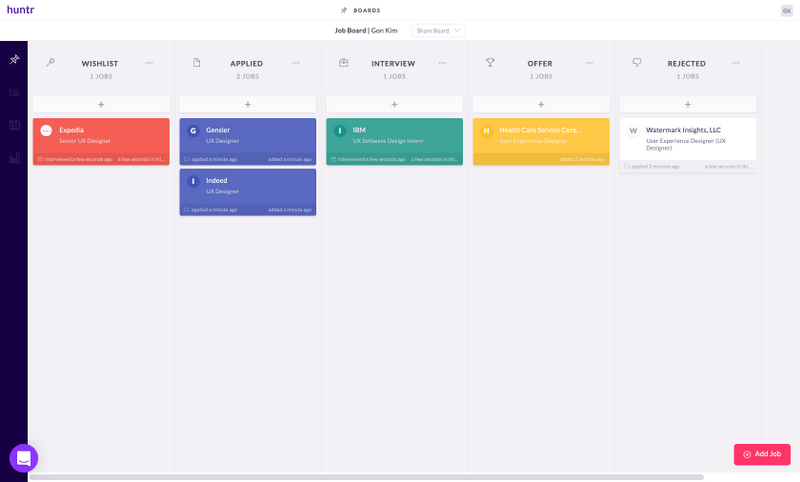 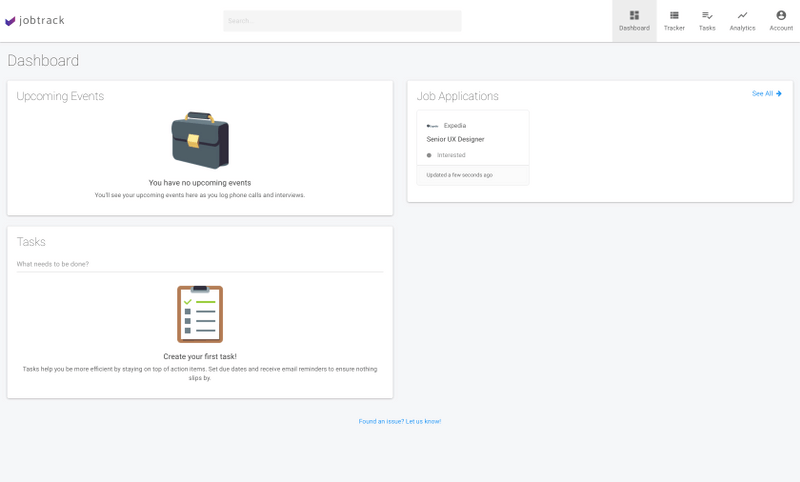 Owners of the job boards on Huntr and Jobtrack had complete control but there were no collaborative features.

Salesforce and Hubspot allowed users to store their contacts, but they couldn’t do more beyond storage. They didn’t see how those contacts were relevant and if there were any connections among the contacts. 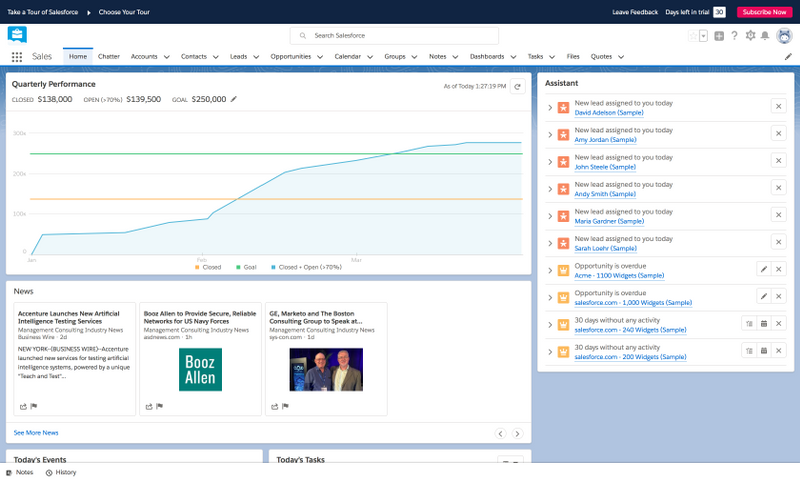 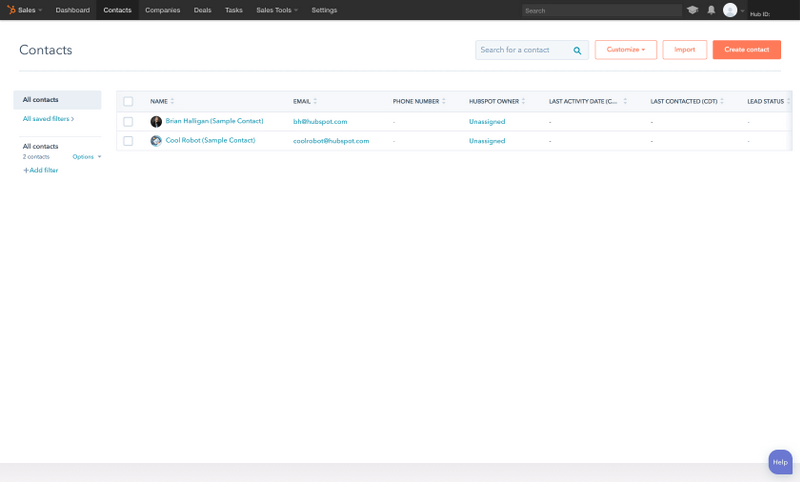 Salesforce and Hubspot offered contact views but the information presented was more relevant to sales professionals, not career advisors.

Fragmentation was a clear issue as these tools were useful for pieces of the process for our users. We started to see how a single streamlined tool could be more beneficial.

Recruiting users for our scope was challenging because not every bootcamp had a dedicated career advisor. Even if they did, they were reluctant to talk with us because we were from another bootcamp. After internal discussion, we decided to broaden our scope to higher education career advisors since their role in the hiring process looked similar to that of bootcamp career advisors.

We collected the following insights from our users:

Graduates are their top priority

Before going into a meeting with a graduate, our users needed to update themselves on the students’ job search activity. If a graduate was behind schedule on getting their stuff done, they made such graduates their priority so they left no one behind.

They maintained open communication with companies and professional contacts to whom they recommended candidates. This network management allowed them to continue successfully connecting graduates to jobs.

Our users wanted to connect graduates and employment opportunities, but they relied on their memory. With a growing list of graduates and contacts, this process was inefficient and mentally demanding, especially when their reputation was on the line.

I began to empathize more with our users. Making mental connections, putting their reputation on the line to do their job, and their success depending on the success of others gave me a newfound appreciation for their work.

To better define and empathize with our users, we created our primary persona, Jacob. He’s a proactive career advisor who thrives on motivating and helping graduates get a job that aligns with their values. He also spends a considerable amount of time maintaining his professional network so he can make the best connections between his graduates and job opportunities.

Betsy, a hiring manager, and Melissa, a graduate, became our secondary personas. We envisioned them as users who interacted with Jacob, but on different sides of our product. 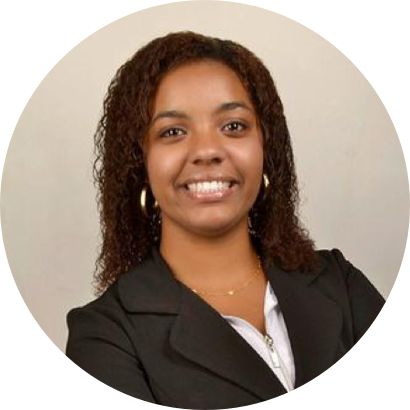 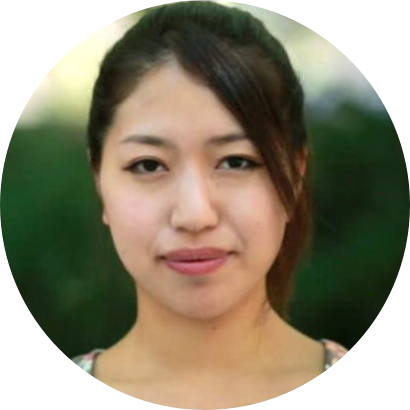 Betsy, the time-crunched leader, and Melissa, the overwhelmed grad.

After synthesizing our research, we identified the main problem. We knew career advisors wanted to facilitate professional connections between graduates and employers, but managing their growing database of past graduates and professional contacts was time consuming. Considering this, we finalized our problem statement: Career advisors need a way to maintain their expanding network and efficiently connect graduates with employers, so they can successfully match more graduates to jobs.

We created the following design principles to guide our solution:

Give users control over how they view and manage their data.

Relieve users of time consuming activities by streamlining their processes.

Allow users to quickly pick up where they left off by providing historical information.

My team began ideating by considering various scenarios with our problem statement in mind. We also conducted a brainwriting exercise and collaboratively built on our ideas. This resulted in the following four concepts, which we tested with five users from two bootcamps. 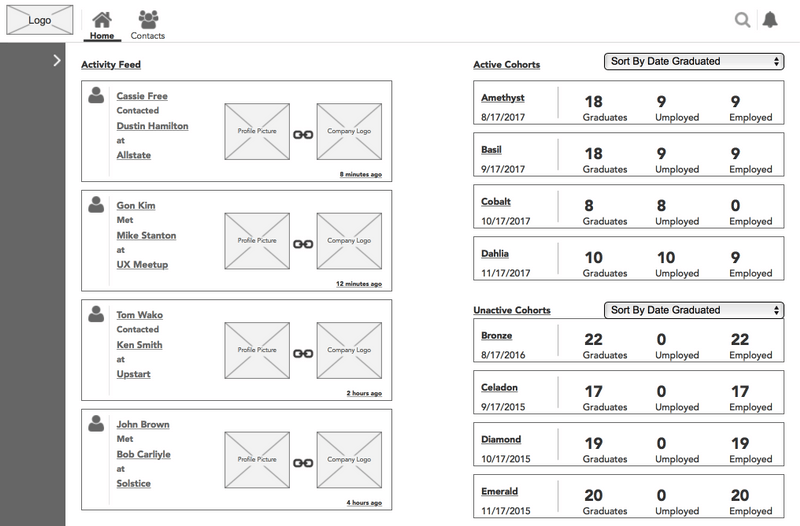 To help maintain their expanding network, we wanted to provide graduate and job opportunity updates to our users as a feed using a social platform. Since all our users were familiar with LinkedIn, we were curious about their reaction to seeing the information presented this way.

In general, our users liked how alumni, graduates, and industry contacts were differentiated, but they didn’t think the layout was intuitive. They wanted more control over what they saw on the home page. 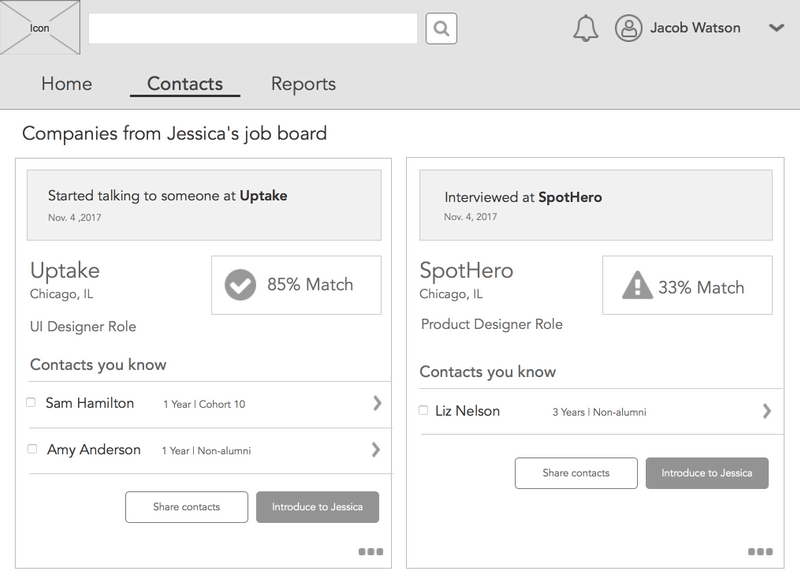 Since our users cared about matching graduates’ values to those of employers, we wondered if our users liked to see those matches. We also considered skills in providing these matches. With this concept, we presented a modular dashboard as the home.

Our users liked to see these matches, but they didn’t know how much they trusted the system. They questioned whether the algorithm used would actually work. 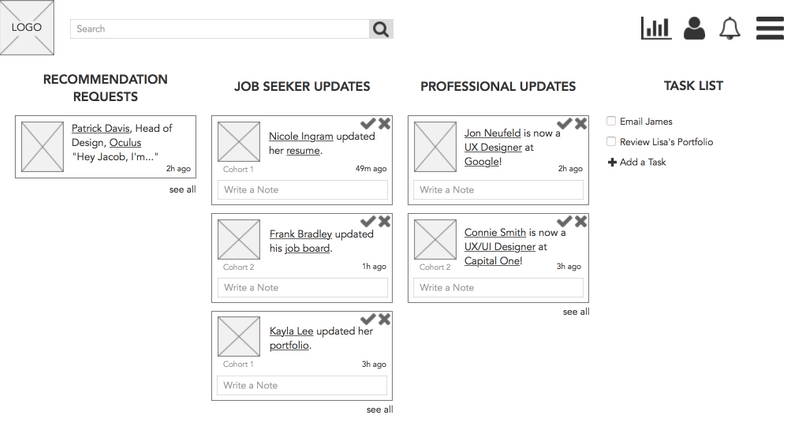 Our users did a lot of the connection work in their heads, and we wanted to alleviate them of the mental load. With this concept, users saw a recommendation request message from a hiring manager, system’s hashtags from scraping the message, and graduate recommendations based on the hashtags.

This concept was controversial. Some users really liked the idea because it would help them do their jobs more efficiently, but other users weren’t sure the algorithm provided accurate recommendations. 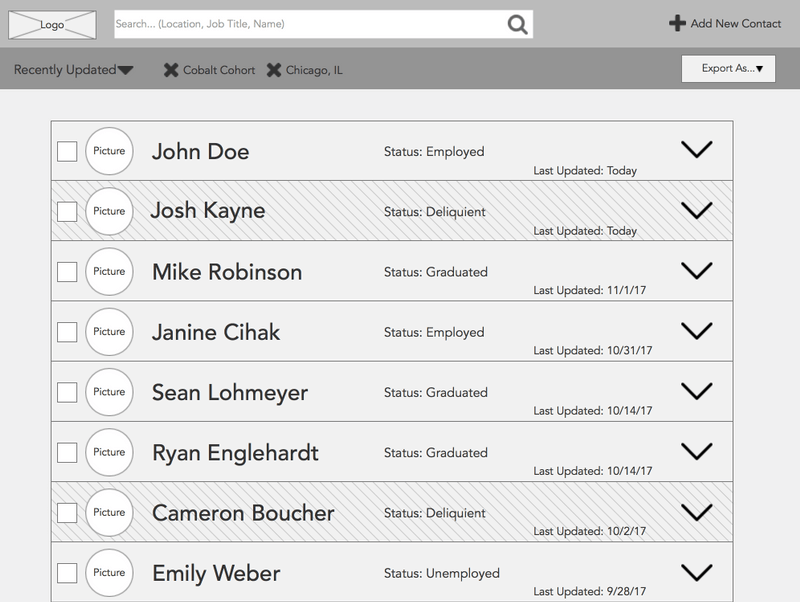 The last concept we tested was a simplified contact management tool. Users searched, sorted, and filtered down to specific contacts while seeing an overview of all their contacts ordered from most recently updated.

Our users loved this concept because it was what they were familiar with. They liked the list view, searching, and filtering, and they liked seeing a lot of data at a glance.

After testing the concepts, I realized our concepts addressed a piece of the problem we identified, but not the entire problem. We may have diverged a bit too far in our concepts, but despite this, we learned our users need control over their data and to prioritize and categorize contacts based on the status of the graduates. They all wanted a simple tool so they could be more efficient in doing their jobs.

With these insights, we converged and iterated on pieces from each concept that users liked. We decided to call our product Keeper thinking about how career advisors keep contacts and information close.

Since our users interact with two different groups, graduates, and hiring managers and recruiters, we mapped out two task flows.

We were able to test our solution and the flows with three more users to gather feedback. Below are our key screens and user feedback on them. 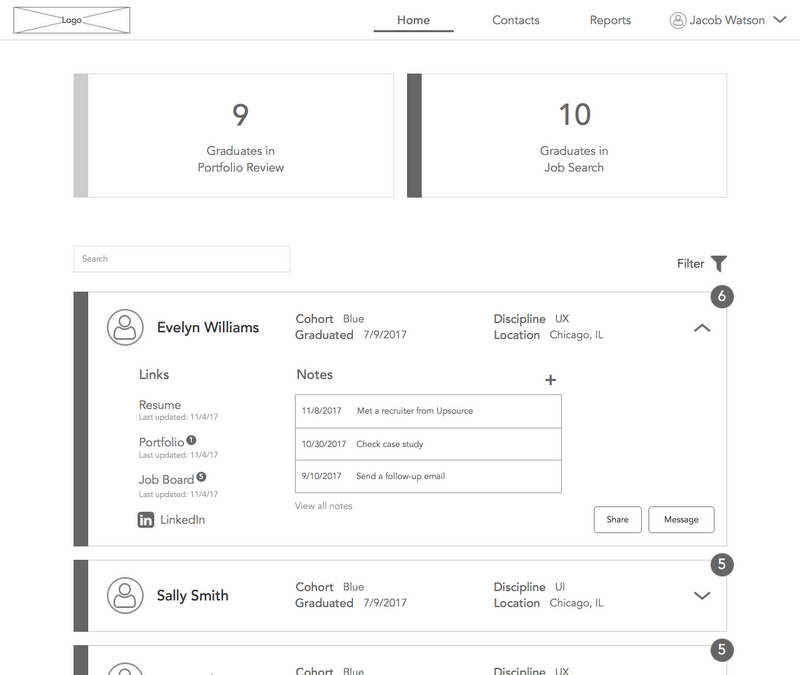 As soon as users logged on, they saw their recent graduates. We put them in two buckets: those who worked on their career materials in the portfolio review stage and those who actively applied to jobs. This allowed users to get an overview of how their recent graduates did. The expanded graduate card revealed more detail that our users interacted with.

Users really liked seeing these graduates prioritized because recent graduates preparing to job search and those job searching required their attention the most. They also liked being able to get a quick overview of graduates but also get down to specifics if they wanted to. 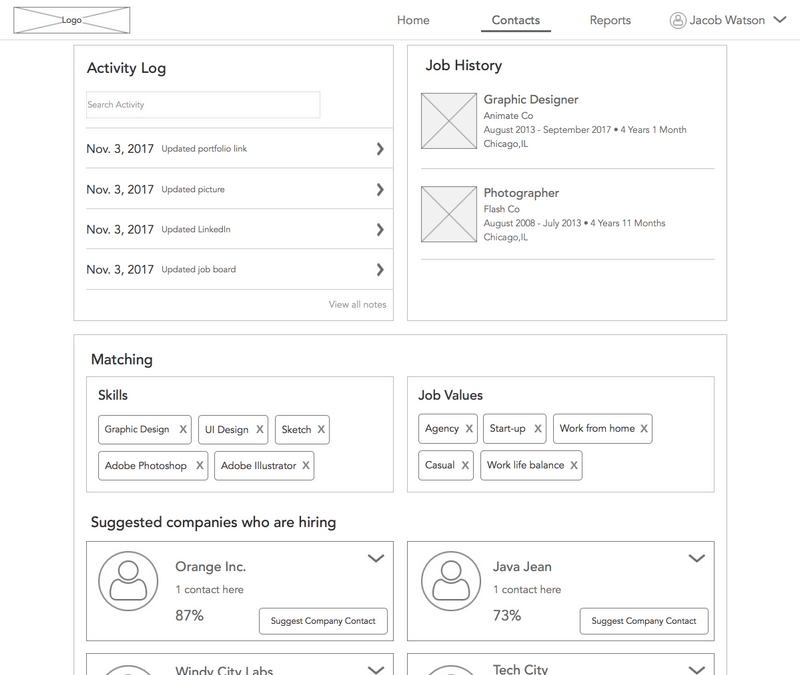 While the expanded graduate card showed more information, we provided even more information, such as their activity and notes, in the graduate profile page. Users controlled tags that provided matches to companies that shared those tags. We also allowed users to suggest company contacts if there were matches.

Users liked the platform doing the connection work, but they still questioned the accuracy of the matches. If the algorithm worked, they saw how it enabled them to work more efficiently. 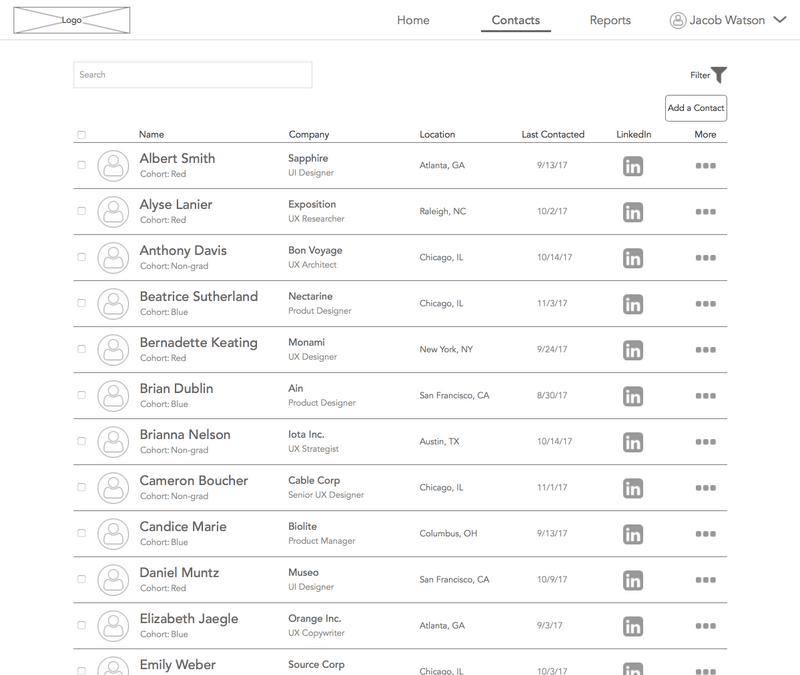 We placed professional industry contacts on an entirely different page. Whereas the graduates on the home page required more frequent interaction, the professional contacts didn’t. Once graduates got jobs, they moved to this page since they became contacts in the industry and no longer needed employment assistance.

This layout was familiar to users and they found this page intuitive and easy to navigate. They liked being able to go directly to their contacts’ LinkedIn page and also see their last point of contact so they could continue fostering those relationships. 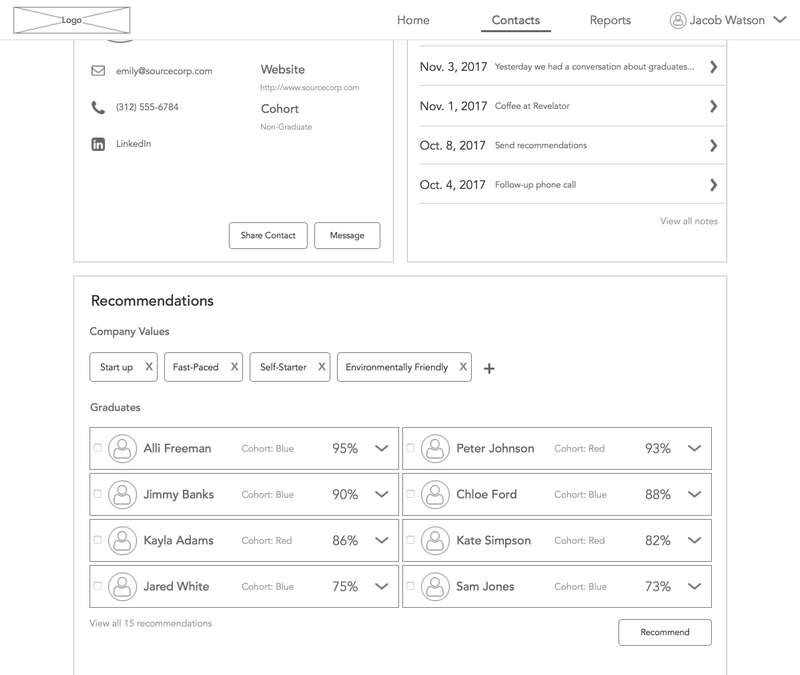 The profile page for a professional contact looked slightly different in that users saw suggested students for the company where the contact worked. They sent those recommendations to contacts and got more of their connecting job done.

The matching capability was still a concern, but again, if the algorithm worked, users loved this idea. They found it easy to make introductions and connect people so they helped both graduates, and hiring managers and recruiters looking to fill positions.

Overall, the user feedback was positive, and I was happy we came up with a solution addressing Jacob’s problem. It wasn’t what I initially envisioned but I felt satisfied that it met user needs.

Although our time on the project came to an end, we made the following list of features to consider to improve Keeper:

What the previous cohort developed was a graduate job board and while we made references to it in our design, we didn’t fully build out its integration. Further building out this integration would provide valuable student activity updates on the platform to our users.

Our users wanted to generate reports based on the data they had to get insight into numbers like the average time it took a graduate to get a job. We didn’t see it addressing our user needs then but we believe reporting would make Keeper an even more robust tool.

Although the concept was tested poorly, we still believed using AI to provide and suggest matches to our users would drastically increase their efficiency. If Keeper were to be actually built out, we suggest enhanced AI features.

The most important lesson I learned from working on Keeper was to let the research and data drive decisions. What we ended up with wasn’t what I had imagined when I first got the brief, but that was completely fine because our decisions were based on research. The initial anxiety from ambiguity became curiosity, and I enjoyed the discovery process at every step.

Keeper also taught me to work with a team. I worked with three other designers, all from different backgrounds. Despite our differences, we collaborated toward the same goal of creating the best product we could, and I’m proud of the results of our collaboration.